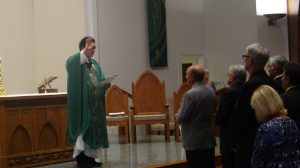 “I am the vine, you are the branches. Whoever remains in me and I in him will bear much fruit” John 15: 1-8

The Crown is the acclaimed Netflix series on the life and times of England’s Queen Elizabeth II.

A particularly revealing moment takes place in the first season of the series. Elizabeth’s father unexpectedly becomes king when his brother, Edward VIII, abdicates the throne in 1936. King George VI was revered by his people for his humility and courage in leading England through World War II. In 1952, George VI dies after a long battle with cancer, and he is succeeded by his 26-year-old daughter, Elizabeth. The young princess confides to her grandmother, the dowager Queen Mary, her fear that she is totally inadequate and unprepared to succeed her father, that she is terrified that the nation and commonwealth will not accept her as their queen.

The dowager queen tells her beloved granddaughter that to be king or queen is about service, service that is centered in God. The person and personality of Elizabeth, Mary explains, cedes to God’s greater good – the monarchy.

“Monarchy is God’s sacred mission to grace and dignify the earth,” the venerable queen explains to Elizabeth, “to give ordinary people an ideal to strive towards, an example of nobility and duty to raise them from their wretched lives. Monarchy is a calling from God. That is why you are crowned in an abbey, not a government building; why you are anointed, not appointed. It’s an archbishop that puts the crown on your head, not a minister or public servant. Which means that you are answerable to God in your duty, not the public.”

Queen Mary instructs her granddaughter that the crown she is about to take on is not about her but about her people; the crown is not just a form of government but a nation’s identity centered in God and the Gospel of Jesus. Jesus leaves a similar instruction to his disciples at the Last Supper: that whether we are a queen or a king or a poor farmer or shop owner, our lives are meant to manifest the goodness of God, that in all things and at all times we “remain” in Christ. As branches of Christ the vine, we are part of something greater than ourselves, something which transforms and transcends our unremarkable “smallness” to define the meaning and purpose of our lives.
(Connections, April 2018)